Today was the first time I played around with Android Protected Confirmation and I discovered some unexpected behavior that I thought is worth documenting.

What is Android Protected Confirmation?

You can use Android Protected Confirmation (or just ConfirmationPrompt) to really really make sure the user sees and confirms a specific message. It doesn’t just open a new Dialog or Activity, but overwrites the screen content from very deep down on the hardware level. This makes sure that nothing can pop up over the message. Additionally, the user has to confirm the message using physical hardware buttons (not just by tapping on the screen). The Android feature was added in API 28 (Android 9). 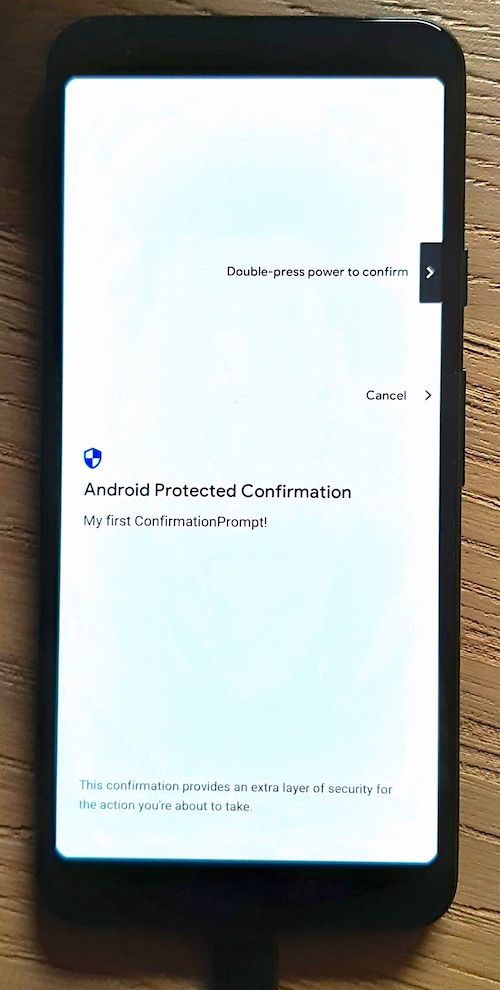 (Note: This is a photo because an Android Protected Confirmation cannot be screenshotted)

This kind of confirmation is intended to authorize critical tasks like a financial transaction or steering medical equipment.

It’s also possible to link the confirmation to a Key in the KeyStore and only make it usable when the user confirmed the Protected Confirmation (see setUserConfirmationRequired(true)).

The usage is quite straight-forward:

(go to a runnable code example)

The following sections discuss unexpected behavior, edge cases, and other things to consider.

It’s possible to check for support by calling ConfirmationPrompt.isSupported(context). What’s weird is that according to the docs it’s still possible that the exception is thrown, even if isSupported returned true. I couldn’t reproduce that behavior. For me isSupported returned false when an AccessibilityService was enabled, but since it’s stated in the docs, it safer to always expect a ConfirmationNotAvailableException.

promptText expects a CharSequence, so you could pass a formatted Spannable to it. However, internally the promptText is converted into a simple String, so no custom formatting is supported on Protected Confirmations, just plain text.

No Line Breaks, No Emojis, and Not Too Long

When promptText contains line breaks (\n) or emojis or other unsupported characters, promptText throws an IllegalArgumentException. Again, without further information in the exception’s message. To learn more about the cause you can lookout in the Logcat for:

I could find these error codes (source 1, source 2):

So when using Android Protected Confirmation, be very careful about the text you show. Avoid showing dynamically created texts or showing parts of user inputs. If you show user input, make sure that the user didn’t use unsupported characters and that the message doesn’t become too long. Also depending on the user’s language, unsupported characters could become a big problem. Unfortunately, it’s not documented which characters are allowed, or what’s the length limit.

A null or empty promptText is not allowed. This makes sense. But in contrast to all the other errors, for empty strings already the ConfirmationPrompt.Builder’s build() call throws an IllegalArgumentException, not the presentPrompt call.

onPause and onStop Don’t Get Called

It was fun playing around with Android Protected Confirmation, but I wouldn’t use it in production. The main reasons are the lacking support and missing documentation. I spent a lot of time trying things out and browsing through the Android source code. When the support of non-Google manufacturers isn’t improved, I don’t see any future of this feature, since almost no phones will support it. If this post helped you, let me know!

If you want to try it yourself, you can use my ConfirmationPrompt-Playground on GitHub: